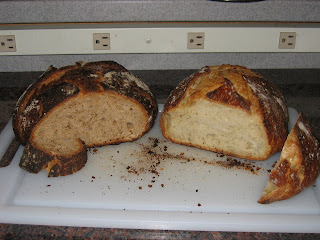 Here’s my second and third attempts at bread. The loaf on the left is the whole wheat variation. The one on the right is the regular one but for both loaves I weighed the flour rather than using a measuring cup.

Both versions tasted ok but neither got up to the proper temperature and the regular one was still clearly underdone. The whole wheat one was badly burnt as you can see. We ate the crust of what we had but I suspect that the chickens will get some treats tomorrow, it was pretty bad.

No clue how to adapt the recipe. I suspect the altitude here is the cause of the problem but I am at a loss as to what to do to fix it, suggestions welcomed.