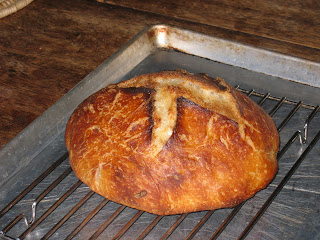 Usually when I’ve tried to make bread here in Colorado I get hockey pucks, bricks or other building materials. Bread fails to rise, or rises then falls flat. In any case it’s dense beyond belief, and while tasty a loaf could feed an army for a week.

This bread actually came out nearly perfect! I used the no-knead recipe in the latest issue of Cooks Illustrated Magazine. The only problem I had was that I don’t have an instant read thermometer and the recipe says to get the inside of the bread to 210 degrees. We couldn’t wait and took it out at 200 and yes, the inside was not quite done. But it was still the best I’ve ever made.

One secret is to use a light lager or pilsner beer. I had to explain to the liquor store lady why I was buying Budweiser! We usually drink good beer, like Arrogant Bastard Ale or Ruination IPA from Stone Brewing. But the recipe calls for a bottom fermented beer using lager yeast so a pilsner was the choice. Best and as far as I am concerned the only good use for a can of Bud. The recipe only uses 1/4 cup so I dumped the rest. Probably should have given it to the chickens, they will eat anything.

Next time I want to try the whole wheat and rye bread versions. And then branch out into better beer but still sticking with a lager yeast.