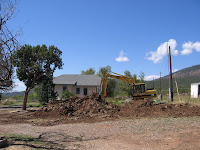 Construction started today on the replacement for the old bunkhouse building. All the old stumps were removed and the rocks sorted from the dirt. Then the rocks were removed and dumped on the old dump at the end of our driveway. The good dirt was saved, we are always short of fill dirt so we’ll use it somewhere. We’ve even had to buy in dirt, we grow great rocks on Garvin Mesa but dirt is hard to come by.

Tomorrow the general contractor comes to lay out the foundation. We did the deconstruction earlier this summer and have been waiting until the dirt contractor could come to start the real construction. 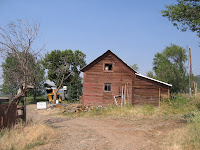 The old building was probably put in about 100 years ago. We know it wasn’t there on 8 October 1908 as we have a picture taken from Redtop that clearly shows the orchard and there is no bunkhouse or red barn. But we also know it was there before 1927 as we have a picture of the guest house taken then that shows it in the background. Beyond that we don’t really know much. The bunkhouse was built in 2 sections and at least one had been used as a house for a while. There was fire damage in two places from a stovepipe throgh the roof so it had a stove in at least two different locations during its lifespan. 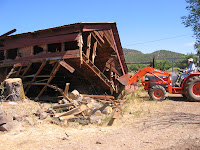 Although we’ve tried to restore and refurbish many of the old buildings this one was just too rotten and in too poor a shape to save. So it’s being replaced by a 2 story shop building. The new shop will have space and cover to do welding downstairs, a covered front porch to the south for farmers’ market days and an upstairs that will be for wool storage and fiber work. It will be insulated with both heat and cooling so we can work in it year round.

I can’t wait for construction to start.