I’ve been working on a replica of the Monmouth cap for a while. The only extant original is in the Nelson Museum and can be seen here .

My first attempt was based on several published patterns that are often referenced. One of them is here and the other is here. 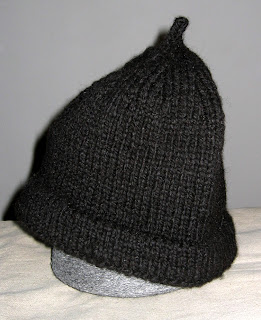 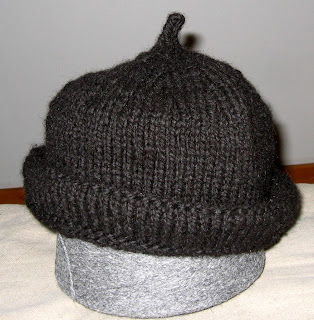 My second attempt was done more the way I usually knit stuff. I leaped off into the yarn without a pattern at all. I started this version from the top down as to me the brim edge looks like a cast off not a cast on or join. I did a few bits of 3 stitch i-cord to make the button then did a series of increases and knitting plain until it was the right size. For the increases I did a knit in the front then knit in the back of the stitch as that made a better more solid increase and I don’t want this to have any holes for cold air to leak in. For each round where I did increases I then did a round of plain knitting to make the hat work properly. 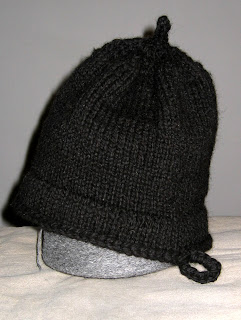 Once the hat was large enough around I knit straight until I was ready to start for the brim. I did an increase in every stitch to double the number of stitches on the hat. Then with help from folks at Taos who showed me how I used the tail end of the yarn so I was knitting from both ends and did double knit for the length of the brim. I’ll have to get pictures of how I did it as once I figured out how to carry both front and back yarns in one hand without tangling it went very quickly. 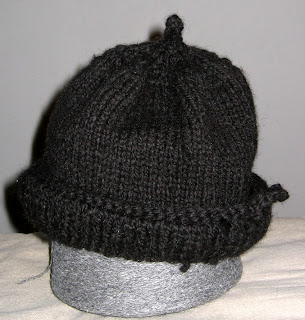 The cast off was done with 2 stitches one from each layer and both yarns at the same time. At the end I did a simple loop chain to make the loop at the bottom of the cap. This version looks a lot closer to the original. Things I liked about doing it this way were that I could start with precious yarn and not waste any. I hate long tail cast on and other yarn wasting methods, probably a result of using my handspun most of the time and the effort to get the yarn made means I don’t ever want to cut any off. So starting at the top meant I could knit straight through with no waste yarn. The double knitting went quickly and made a proper looking brim easily and the cast off looks more correct for the bottom than my first version.

Things I am not happy with include the increases on the top and some of the loose ends I haven’t finished weaving in. The top increases don’t quite match the original, but the picture of the original is poor. I have written to the museum to see if there are any better pictures but none exist. For now this is my best attempt so far on making a fairly accurate Monmouth cap. At least it is from very accurate Black Welsh Mountain sheep wool.