Mix the dry ingredients. Then stir in the wet ones and cover with plastic wrap and let it rest for at least 8 hours or longer. Kneed briefly and place dough on a parchment paper to let it rise for 2 hours. Slash the top before baking. Preheat a covered dutch oven and bake bread covered for 30 minutes then uncovered for 20-30 minutes more. The recipe calls for a 500 degree preheat and a 425 degree bake.

To that basic recipe we made the following changes to every batch. In all cases 5 ounces or 1 cup of the regular flour was replaced by whole wheat flour. After our last attempts I did some on-line checking and talked to skilled local bread bakers. Based on those discussions we had several things to try including more water to the dough initially, lower start and baking temperatures and eliminate the honey to prevent the crust from getting too dark. To all the sets we ended up adding 3 extra tablespoons plus a teaspoon of water. It took that much for the dough to incorporate all the flour. We bought new yeast in case our old yeast was too old to work. 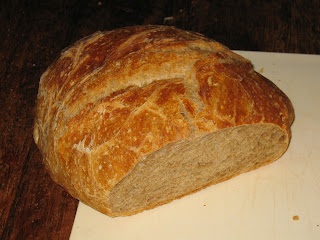 Version 1 used regular all purpose flour for the white flour portion and new yeast. We preheated the oven and dutch oven to 425 degree. When we put the bread in we reduced the heat to 375 degrees and baked it covered for 30 minutes then uncovered for 25 minutes. 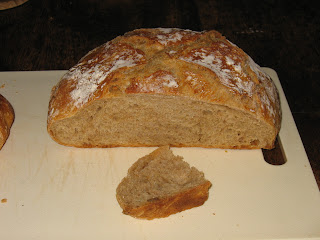 Version 2 used bread flour for the white flour portion and new yeast but the baking times and temperatures were the same. 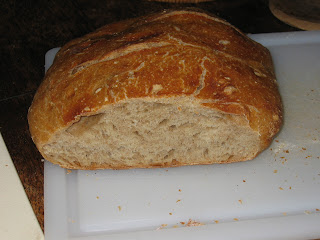 The final result is that the old yeast is a problem. Bread made with the old yeast did not rise as well and was not as good. A surprising result was that the bread made with the regular flour rose better and was our winner in terms of taste and texture. I had expected the bread flour to perform better than it did. Making 3 loaves at a time used up one can of Budweiser so there was no beer wasted.

Next set of tests we want to try will use the same preheat and baking temperatures. We’ll stick with regular flour for the white flour portion and it’s clear we don’t need any honey. The additional liquid seemed necessary and is easy to do. I want to reduce the salt used and I want to try replacing more of the water with beer. We also want to try other pilsner yeast beers. First up, trying Corona as a lager with a bit more flavor.