Off to Wool Festival & Bears

Heading out today to attend part of the Taos Wool Festival. I’m taking my second revision of a Monmouth cap and the start of a scarf from a chart that I am having problems reading in hopes I can get some help from some of my knitting friends who will be there.

The Monmouth cap is interesting. My first one followed the many on-line patterns fairly well but when it was done, although a very nice knit cap, it doesn’t look at all like the one in the Nelson Museum. So I started another of my own design but am stuck on the double knitting part for the brim. I think I have a plan to finish it but want to run it by someone else first. 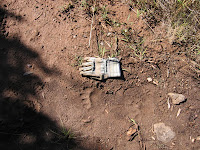 About a week ago we had bears visit us very close to the house. I keep meaning to put up the pictures of the tracks but just didn’t get around to it until today. There were at least 2 bears one larger and one a bit smaller. The first track was a small distance from the house as you can see. It was fresh, we back tracked and found fresh scat too. 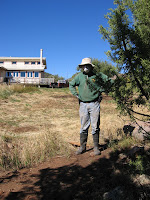 Bears can be very serious predators of sheep. They will go into a killing frenzy and just keep killing sheep without eating any of them. So far our guard dogs have managed to keep them away but I am anxious to get the bears off the mesa and hiberbating. The next morning we found more tracks very close to the house. Right by the porch as a matter of fact. 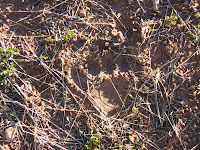 There is a huge overpopulation of bears. When Colorado got rid of the spring bear hunt we started having many more problem bears that come in where people are and learn about domestic stock as food animals. We are allowed to protect our stock but the increased density of houses in rural areas make it harder to find clear sight lines to shoot the offending bears. Predator protection costs add a lot to the cost of our wool and our meat. Each guard dog puppy has nearly $2000 invested before he or she is deemed a reliable guard animal. 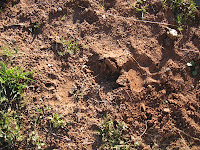 Sometimes I wish the urban folks who think predators are cute would come see the devestation they can cause. But no one wants to see the bears shredding sheep and guard dogs, or the coyotes dragging still living lambs off while their mothers try to save them, or worst of all, wolves first attacking and killing all the guard dogs of a flock before decimating the poor sheep.

So far we have been very lucky, we have not lost any sheep to predators once we had enough guard dogs, 4 for our small 20 acres of land. We have lost geese and many chickens and had sheep injured who survived. I hope we can keep enough dogs on hand to protect our precious animals.