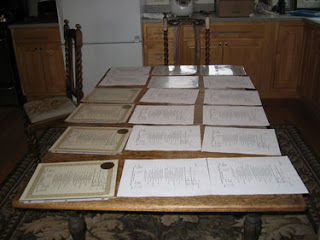 I have the opportunity to run 14 primary breeding rams this year and 2 backup pens. Each primary ram will only have 4 ewes and then the backups will each have 28 ewes. This is a chance to use 16 different rams for breeding, an opportunity that is very rare and potentially really valuable.

Trying to plan how best to use this opportunity has taken a lot of work.

My first task was to evaluate and rank all my adult rams. I have 27 so there is a good set to choose from. I took my number 1 and number 2 ram and decided they are going to be my backups for this season. I then picked out the next best 20 rams that I would select my candidate primary rams from.

Then I tried to pick the four ewes to go together, find a primary ram. That went fairly well but when I got to the next step, put the backup pens together I got stuck. I wanted to combine groups of ewes so that I didn’t have to sort or handle any sheep after the primary breeding to avoid any risk to the potential lambs from excess handling. I got bogged down in the problem of groups not being able to go to my chosen backups and using rams in more than one primary group which is impossible. I got frustrated and gave up for the day.

When I felt up to it I tried again. This time I worked the problem backwards.

I sorted all my ewes into major bloodline groups. Then I sorted the groups into the 2 backup ram pens. I took my 2 backup rams out of contention for use as primaries.

I took each separate group of ewes in a single backup pen and sorted them into 7 groups of 4 ewes each. These will be my primary breeding groups. In this sorting I tried to keep closely related ewes together (mom, daughters and granddaughters) or otherwise have groups of 4 that are very similar in quality and faults.

For each group of 4 ewes I would turn over the rams I could not use on them for one reason or another. I am trying not to double up on any Abbotstone Urwin bloodlinee. I also wanted to improve wool in some lines where wool has been poor and I wanted to focus on meat quality so tried to put ewes with rams that would improve the carcass traits in the lambs.

For each group of 4 ewes I picked out a number 1 and number 2 ram to use as a primary. I did each individual group of 4 ewes separately starting with all 20 potential mates.

Then I went through all the groups to make sure I did not have a ram used twice. Where I did I went to the backup ram for one or the other of the groups. I was left with only a single group of 4 ewes who had both their first and second choices being used already as rams because they were the first choice for some other group.

I then took those 4 ewes and did the process over again but took their number 3 ram for them.

The entire process from start to finish took about 4 hours but I now have all the matings planned.

I also got to review all my mating plans and choices with a good friend who is a retired animal science professor in California who also breeds sheep, goats and cattle.He agreed with not only my groupings of ewes and my reasons for grouping them that way but thought the mating plan made sense. There are some risky matings and some that are a test of rams that are unproven but on the whole I am pleased it worked out as well as it did.

Now to get all the girls bred and see what we get next spring!