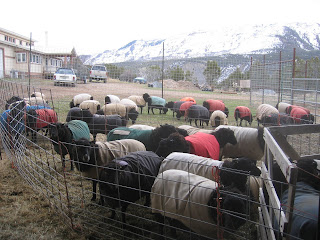 Saturday was our sheep shearing day. Friday we picked up Eifion. That was the good news. The bad news was his shearing equipment in his luggage didn’t make it on the same plane he did. He tried to shear the first flock with my Lister shears and got it done but it was clear the rest of the 30 or so sheep to shear on Friday were not getting done. We got them all rescheduled to Saturday and Sunday. The lost luggage came in at 7pm and we finally got home about 9:30. He shore 2 rams to test all the equipment and then went to bed. Next day we got started at about 8 am. He did the rest of the boys first as it was starting to rain and they were not under cover. The girls all had coats on and so even a light rain would be ok. Then we started on the pregnant ewes. Here they are in the sweep waiting to have their coats taken of and get shorn. 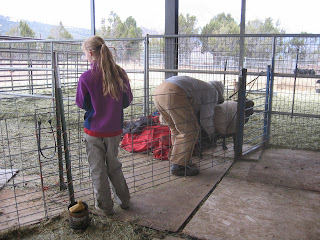 Here is Ken taking the coat of a sheep in the chute. We had helpers, three neighbor kids and our friend Monica who were most welcome. Eifion got through all 118 of the rest of our flock by 1pm and we stopped for lunch. Many of the fleeces are really nice and the sheep were all in good shape. 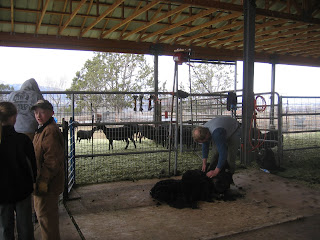 With our flock done we set off to try to do some more that had been rescheduled. He did 31 at once place then 4 at another. Home for a good mutton steak and wine dinner.

Sunday we started out again with several stops. 2 at a winery where we also got a bottle of wine to try. 2 more at a new place for a person with her first sheep. 6 at another new flock and the 4 more again a new place. We had a person flake out on us. I’d called to confirm that we’d be there on Sunday several days earlier. But when I called to say we were heading there next I was told that they had already gotten their sheep shorn. They didn’t even have the courtesy to call and tell me to cancel our stop! I was rather angry and they will not be able to get their sheep shorn again by anyone I help with.

Next stop was for 2 groups totaling 20 sheep. 5 of them hadn’t been shorn in two or three years and they were a breed that is supposed to be shorn twice a year. Eifion soldiered on and did an excellent job but it was very tough going. He charged more but not nearly enough for that amount of work. Last stop of the day was for 15 more dairy sheep. Then home to dinner.

This morning we woke up to about an inch of snow after major rain, hail and wind last night. I’m just glad we got all the sheep done as you can’t shear wet sheep and it would have been a real disaster if the storm had arrived a day or so earlier. We took Eifion to the airport today. I think his planes got all messed up as the flights have been delayed or diverted but he hasn’t called so I assume he’s managing to get home somehow.

Next sheep job: vaccinations, federal flock inspection and wormer before they go on pasture to lamb.