You never quite know what you will have to handle at morning chores.

This morning after feeding all the critters we were watching the adult rams. One was being chased by both Becky and the other rams. We’ve learned that when that happens you must get the picked on sheep out of the pen or he will get injured.

So we caught him and put him in with the ram yearlings. Of course they all started bashing him so we decided he had to come back out and go in an isolation pen. I went in to catch him and was trying to drag him out of the gate with one hand on a horn and one hand under his chin when it happened. The horn cap and part of the horn core broke off in my hand, I fell backward just as a ram yearling bashed my other hand holding his chin.

Now we have a ram running around with blood spurting out all over, I’m on the ground and can’t get up because I need that hand to push up and I’m afraid to roll over and present a target for now upset and hyper ram yearlings.

Ken was manning the gate to keep everyone in. He came and helped me up and we regrouped. Got 2 crooks, managed to guide the injured ram out into the aisle way. We cornered the ram and looked. The entire horn core was infected with pus coming out so it was a problem even before it broke off. He was bleeding a lot, with blood pouring out the horn core and all down his face. I went inside to get a dose of antibiotic and the blood stop powder.

We got him cornered and decided to use a sheep tractor made of jug panels to walk him to the isolation pen. During the move he managed to get his head under the panels, ran partly out, got the jug panels hooked on the handle of the wheelbarrow and pulled that over. I had to let go because my wrist couldn’t hold the panels and Ken was trying to catch him but couldn’t get into a safe position. So we now have an injured ram loose in the hay barn and yard area. After a bit of a bobble with the ram opening the gates to get out of the hay barn area into the main yard we finally got him cornered and into the pen. Ken used a jug panel as a squeeze chute and I successfully got the antibiotic into him.

Here is what the horn that came off looks like: 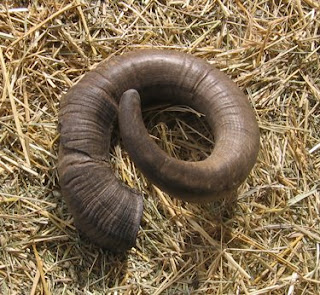 And here is what he looks like now. We ended up not needing the blood stop powder. It looks pretty awful but it has stopped bleeding and from past experience if we wash it then it will just start bleeding again and with the infection the best thing is to keep it out and open for a while. 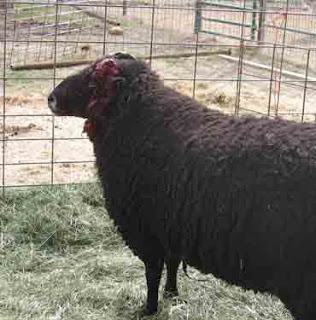 Looks like he will get a trip to the slaughterhouse as soon as he comes off slaughter withdrawal from the antibiotic. Actually we’ll at least double that time maybe more. Slaughter withdrawal is 2 days, but I doubt if we can get him in for several weeks.

My wrist is ok, I’ve got ice on it and took some aspirin. It’s not broken but I am swelling up a bit.

Just another day at the farm.