Some of you know that I’ve been working for several years to document and register all the Canadian purebred Black Welsh Mountain Sheep. Once I really started to document the sheep I realized how critical they were genetically with a very precarious situation in terms of numbers of sheep and bloodlines. I started working then, about 4 years ago, to try to get the border open and ship sheep or semen to them. 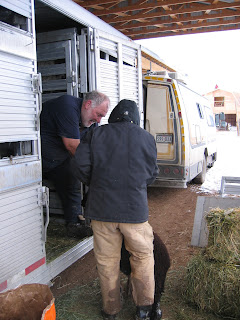 We went through the comments on the border regulations proposed by the USDA, the mad cow problems, the political tit for that that stopped us cold for months at a time, inability to ship semen because I was not scrapie certified, and more. The border finally opened in July 2007 and I started asking in August what rams I could send since the restrictions on shipping ewes were so ridiculous that there was no way I or any other breeder could do it.

I never did get an answer to my request to ship a UK sired ram to Canada even after asking my federal representative for help
but eventually we did sort out 11 US sired rams that could be shipped, 8 ram lambs and 3 adults. 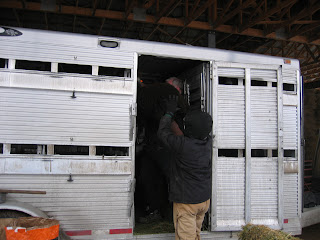 The paperwork was incredible, things were touch and go until 14th December when we finally had the final US paperwork in hand. This after faxing a copy for approval, getting verbal approval, sending the real certificate, having it rejected, fedexing a replacement, having to send additional certifications and so on. And that was just the US side, the Canadian side also required significant work. Becky Bemus is the Canadian member who did all the paperwork on her end. By this time the hauler was already committed to the trip. On our end we had to tattoo all the boys as well as double tag.

Sunday we had to go to rescue the hauler who had a significant mechanical problem about 40 miles from us. We helped arrange for a tow truck for his vehicle and hauled the trailer, full of other livestock he was hauling to the mechanics to wait until Monday morning. It took until today for him to get parts, they had to be overnighted from Denver, there were none in western Colorado. We finally loaded the last of the sheep and he left the driveway at 5:15 pm. 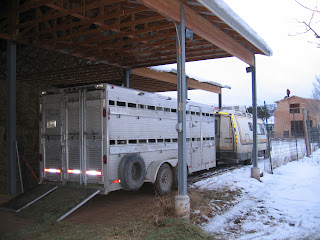 While the trip is not yet over, the sheep are on their way to Sweetgrass MT where they will be transferred to another trailer belonging to Canadian member Lois Heslop for the trip across the border. We are under a deadline, the sheep have to clear US customs, US vet inspection, Canadian Customs, Canadian vet inspection and all be done by the end of Friday or the border shuts down until 28 December. We won’t even go into the fact that Lois has to have a passport or she won’t be allowed back across the border and tag them all with Canadian tags before they travel too far into Canada.

Dr. Sponenberg from ALBC is working with the Canadian breeders who are getting rams from this importation to develop breeding programs that will work to help solve their inbreeding problems and effectively use these new rams without swamping critical Canadian bloodlines.

I hope to work with Becky and Lois and all the others involved to write a detailed article for the club newsletter in case anyone else wishes to export sheep. But for now the sheep are on the way and now out of my hands.

In related efforts 10 ewes are traveling in the same trailer to flocks in Washington providing them with new blood from Wye Heights Ysgawn, the ram I got from Tom Wyman.

And to top it all off, both Ken and I are sick with the Christmas cold that is going around Paonia so we are not feeling great after lifting nearly a ton of sheep shoulder high into the top deck of a trailer.

But the sheep are shipped!!!!