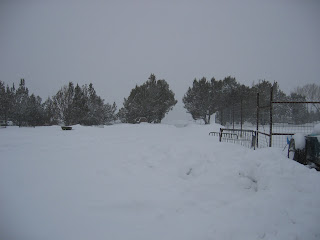 Snow just keeps on coming. This view is of the driveway, after Ken plowed it for hours! We’ve got a good 2 feet or more on the flats, a lot more in drifts and even the main hay barn has snow underneath from where the wind has blown it in. It’s been cold so the sheep are eating more but otherwise are doing just fine.
However they are bored. Bored sheep try to turn everything into a toy. One ewe has figured out how to open the gates. The latches have to be lifted up, and the the bar slid to get them open so it’s a pretty impressive feat. We now have to make sure they are tied with chains or baling twine just in case. She’s started playing with the chains but I don’t think she can open them. 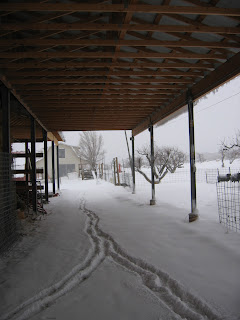 The rams have figured out how to either untie or destroy baling twine gate ties. All the gates have to be double tied and we have to replace the ties often as they bash their horns against the gates and rub the twine until it breaks.

And one ewe lamb has learned how to jump up on top of the other sheep at the feeder and walk across their backs to get to a better position. I wish I could get a picture of that but by the time I dig out my camera she’s jumped off.

From here it sure looks like at least 6 more weeks of winter. I just hope it doesn’t all melt at once or we’ll have floods this spring.