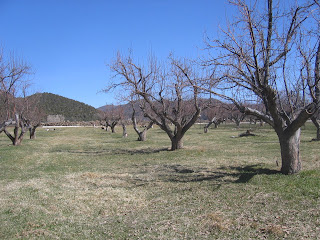 Well we thought spring was coming. The snow had melted and things were starting to green up. The grass was just getting going and the guard dogs looked ready to start the lambing protection job. 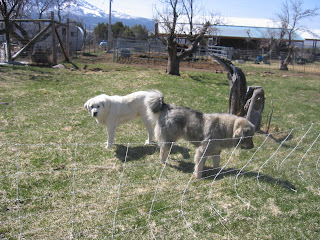 Then we got this…

More snow leading to again more mud when it melted the next day. Last year we had sheep out grazing on 28 March. It’s already 11 April and there is not enough grass to put anyone out yet. We’re due to start lambing next weekend and we are not set up to have ewes lambing in the winter hay feeding corrals and barns so I sure hope the weather warms up and the grass starts to grow soon. We still have a lot of hay left so we can afford to keep the sheep in for a while longer but the lambing ewes have got to get out on pasture before they lamb.

We’re at least several weeks behind in terms of bud growth on the orchard too. Now that may be a good thing, last year we started early and when the trees were in flower we got a major frost and snow storm in May that killed all the fruit for the year. At lest with the trees running behind schedule we may have some apples this year.