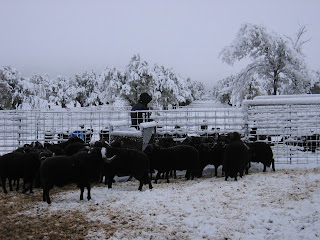 First snow here on Garvin mesa. It’s a bit early this year, usually we don’t get snow down here until later. The sheep love the snow. I think because they have such nice warm wooly coats they enjoy playing in it and really like cold weather. The rams are eagerly waiting for their breakfast.

The ewes especially like to go around the corrals licking and eating the snow and icicles that form. What they don’t like is the snow sliding off the metal roof of the barns into their pens. We position water tanks under the roof to catch the snow and a ridge usually builds up too. The sliding snow makes a lot of noise and scares the sheep. Most of the ewes have decided that mud is better than the noise above their heads today. By mid winter they usually get over this and will stay under the barn when the snow slides.

It’s supposed to be in the mid 60’s this coming week so all this snow will be gone. As I type this it’s already melting and we’ve got major mud outside.