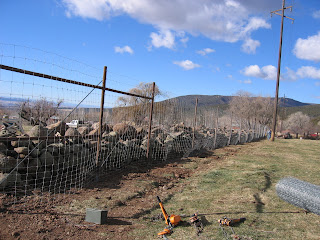 The north side elk fence has wire stretched across half the span. From the corner up to the gate in the middle. These pictures were taken before it was stretched tight and wired to the posts. By the end of the day yesterday wire had been hung and stretched on the second half as well. In the middle of the span there will now be a good gate. Before there was a rather broken down wooden structure that might have been able to be opened with great difficulty. 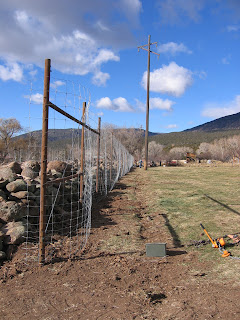 Welding of the remaining few braces at the end posts and gate openings continues but is likely to be finished today. Then there is just one more section of wire to stretch and attach. The last thing to be installed will be the new gates. Before all the gates are done we will have to make a pass through the entire place removing and flushing out the deer. It didn’t take them long to figure out to come in to the orchard and eat. It’s been over 25 years since they last had access but we counted 11 in one night and I think there may have been more. The dogs have given up and no longer even bark at them much less move them out.