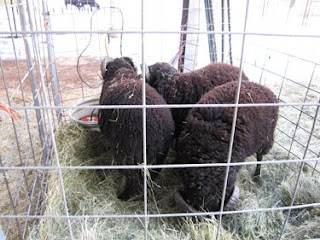 We got the backup rams out of the ewe pens today. The 2 backups, Desert Weyr Kevyn and Desert Weyr Kirk, and the one live cover primary ram, Desert Weyr Kai, are now in a tiny pen to get used to each other. We’ve found that by cramming the boys in together until they all smell the same we avoid most major fighting. We are planning to put these 3 boys plus all the ram yearlings in a small pen maybe tomorrow or Tuesday to get them all living together. Later in the spring we’ll combine the old rams and the younger rams back into one big bunch.