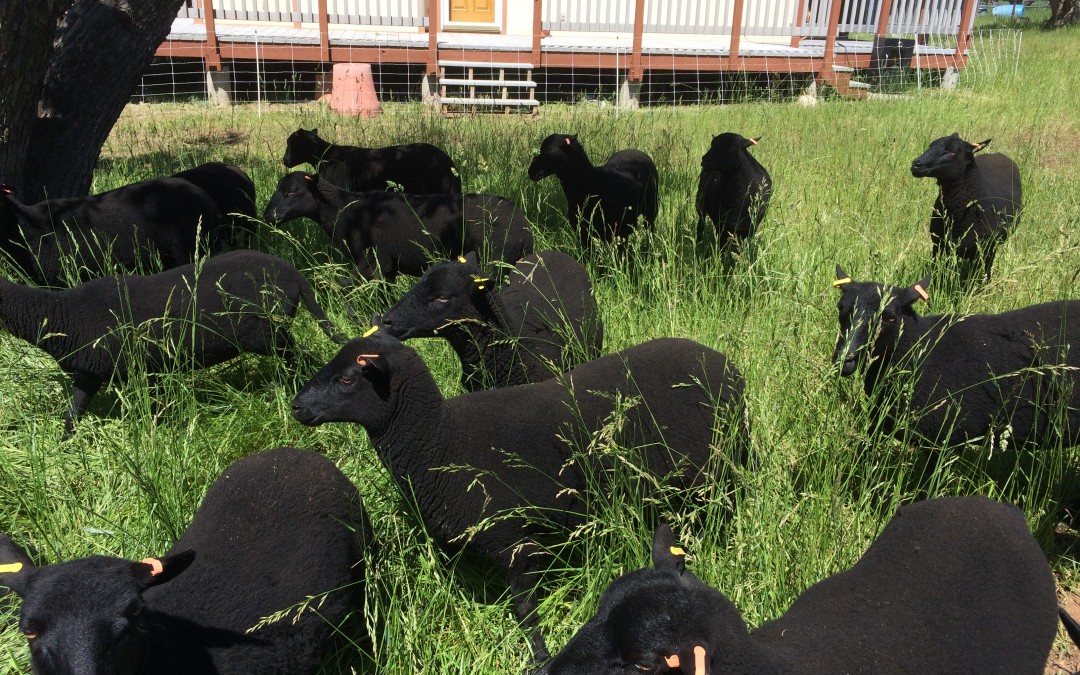 We are well into the movement of sheep to manage the grazing. Currently we are running 4 separate groups of sheep, ewes with lambs, pregnant ewes, yearling ewes and all the rams. The yearlings are being used as lawnmowers all around the house. Pregnant ewes are being... 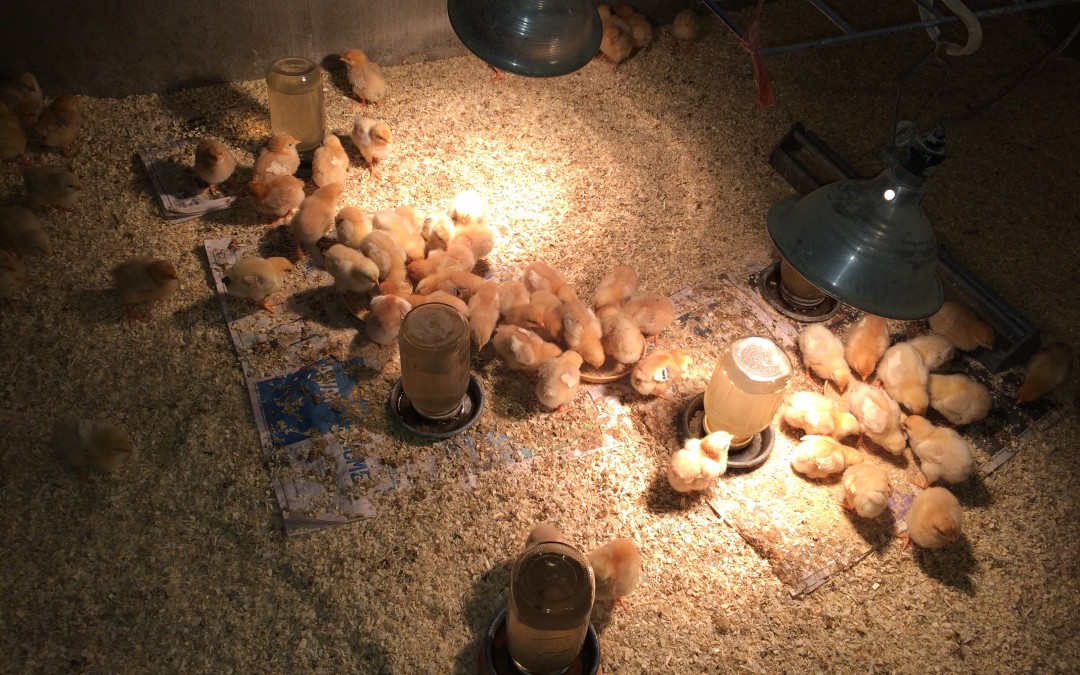 Every year we raise one batch of meat chickens for our use and for a few select customers who order birds in advance. This year is no exception. We get just hatched Label Rouge birds from a local hatchery. They are installed in our chicken barn and doing...

We are still lambing. So far only 8 ewes have lambed and we have 10 live lambs. We did lose a ewe and her twins to a really bad dystocia but those are the only losses we’ve had so far. Our AI girls are looking like they will pop if they move too fast. We are... 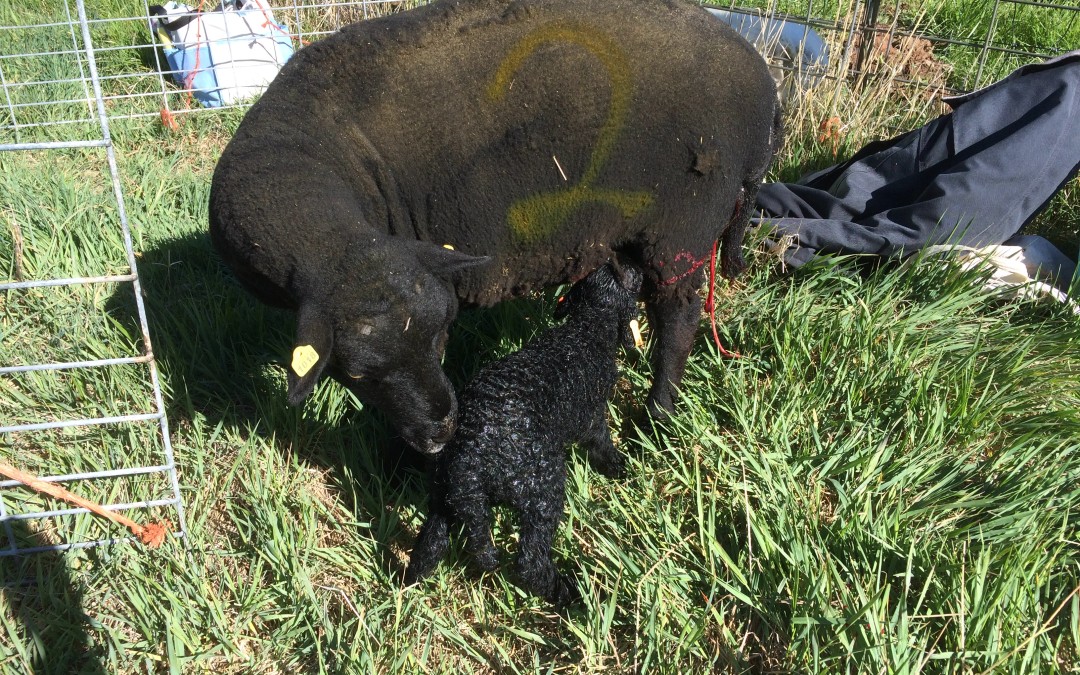 We actually started lambing yesterday but today was when I got some pictures. This was a large ram lamb, over 8 pounds, that was upside down and had to be turned before he could come out. Mom and lamb are both fine now. 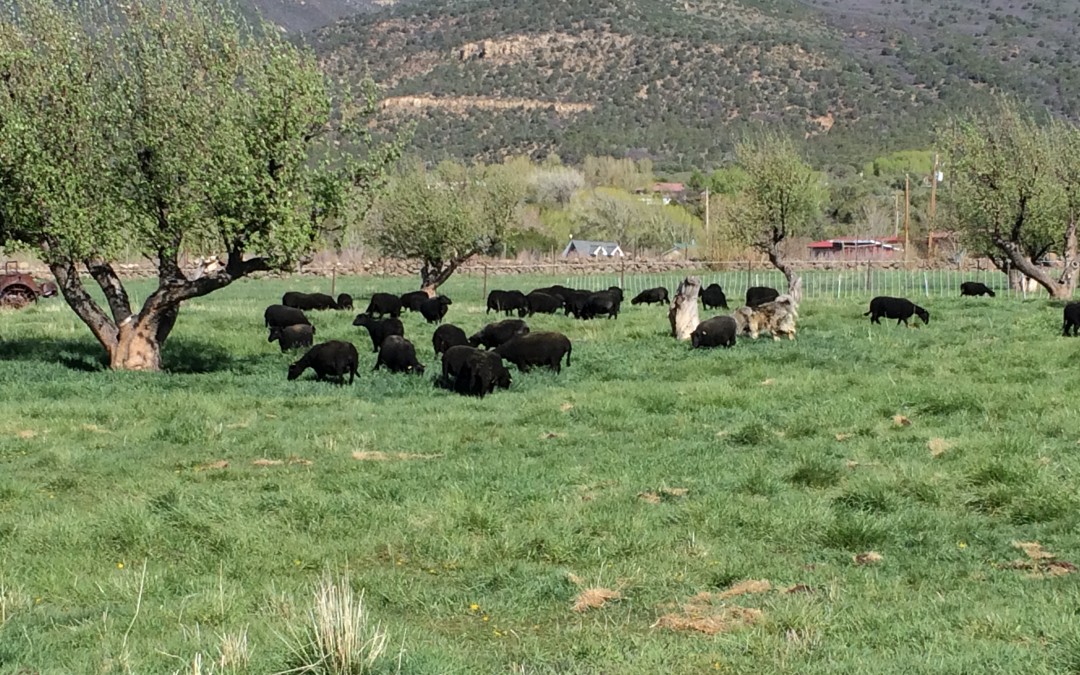 Finally Shorn and Sheep on Pasture

Finally got all the sheep shorn and the pregnant ewes are now out on pasture. Just in time. Lambing due to start 25 April. 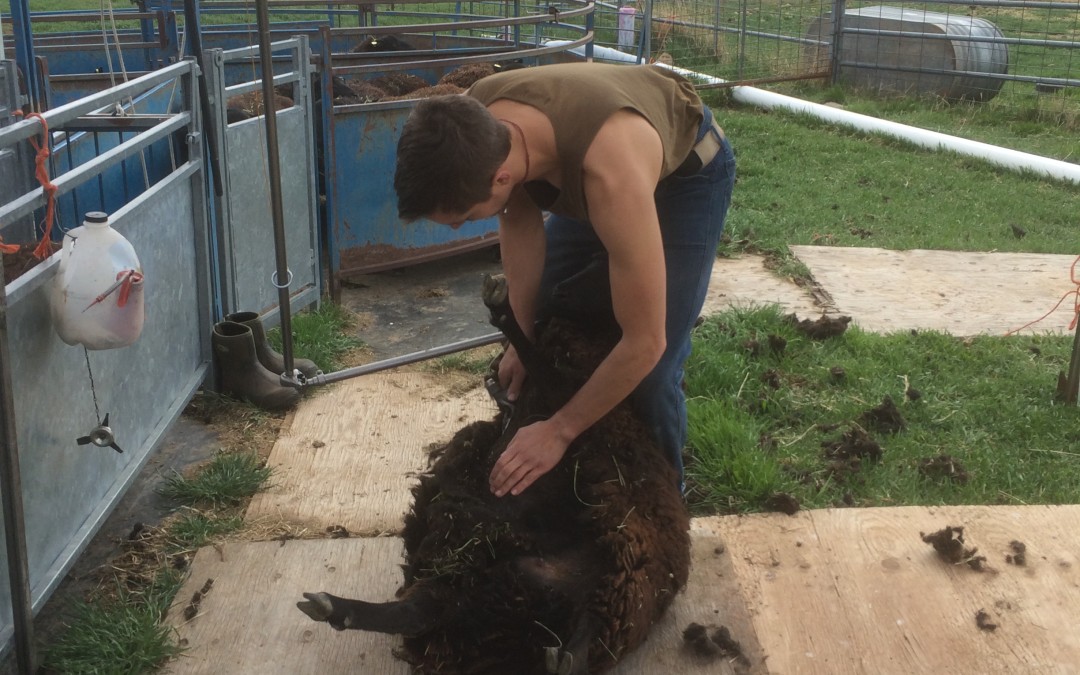 Shearing started, but then the shearer got badly injured and so we are now waiting for a replacement. 102 left to shear.

I’m a bit late in writing this post but felt it needed to be written. Last week we butchered a ram that had a broken leg a long time ago. The leg was healing but it was crooked and he was never going to be a breeding ram. Because he was the only sheep to go to... 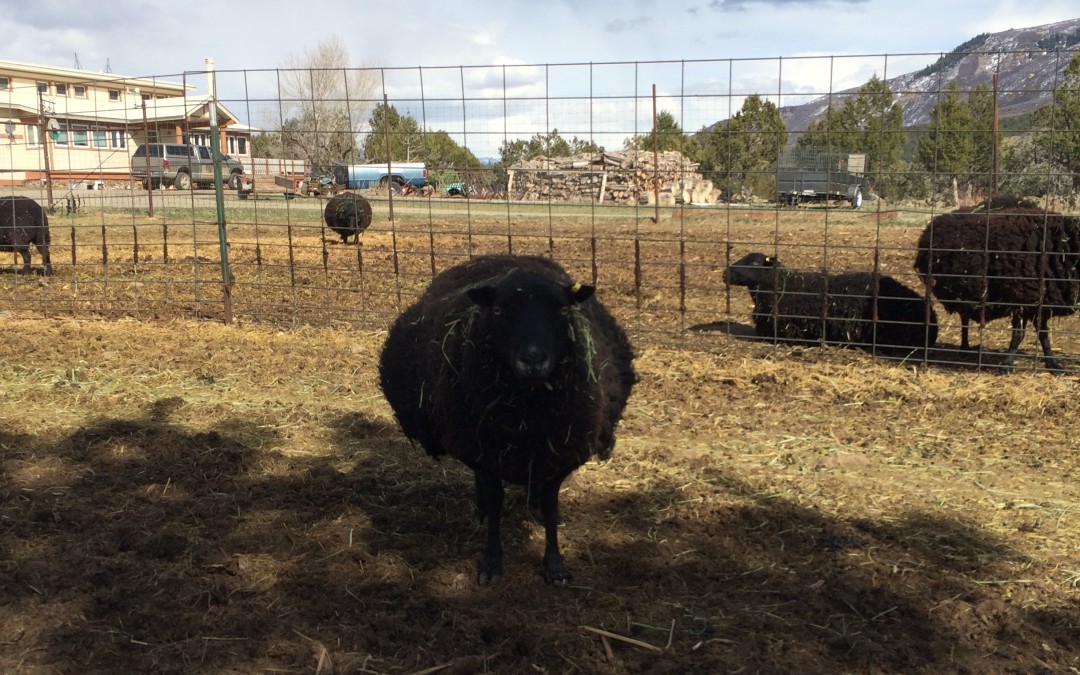 Warm and dry again. Pregnant ewes are rotund. Still have about 6 weeks to go before lambing is due to start. Looks like a lot will go to the AI so up to 30 all due at once. 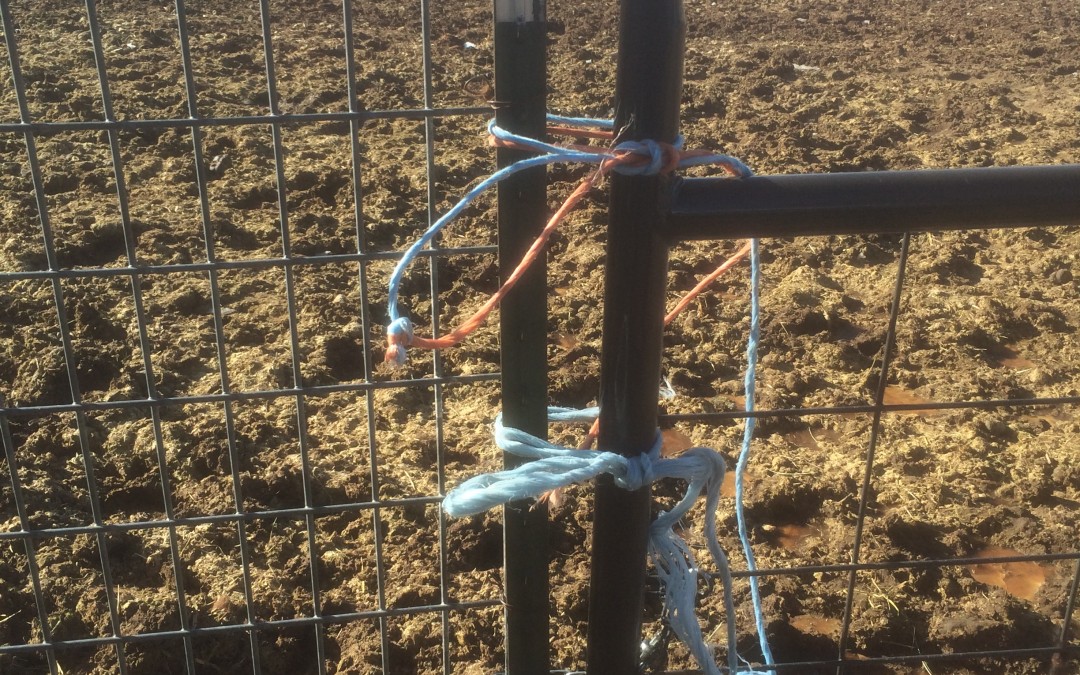 Having smart sheep isn’t always a good thing. This is the gate at the bottom of the corral where the ewe yearlings are living. These brats have figures out how to unclip the chain and untie the baling twine. So now we try to put enough separate ties on so that... 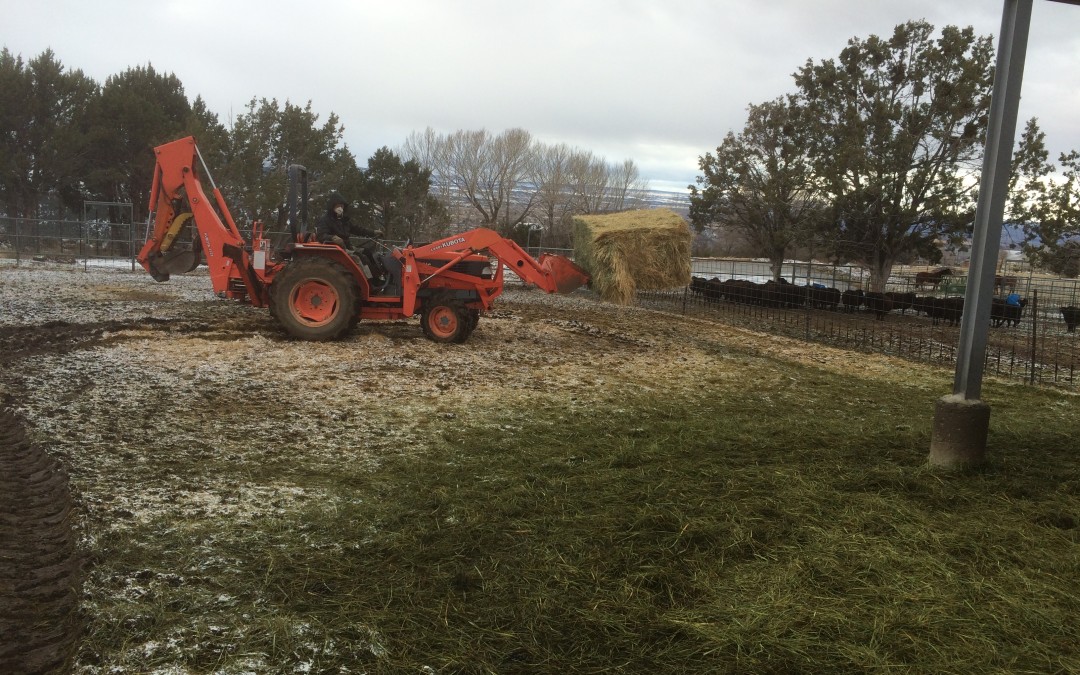 Morning Chores. We move the ewes out of the pen and close the gate. Ken can then drive a bale in and place it under the hay shed row roof. Put the hay feeder panels back around the bale and then take the twines off and let the sheep in. It’s working well. These... 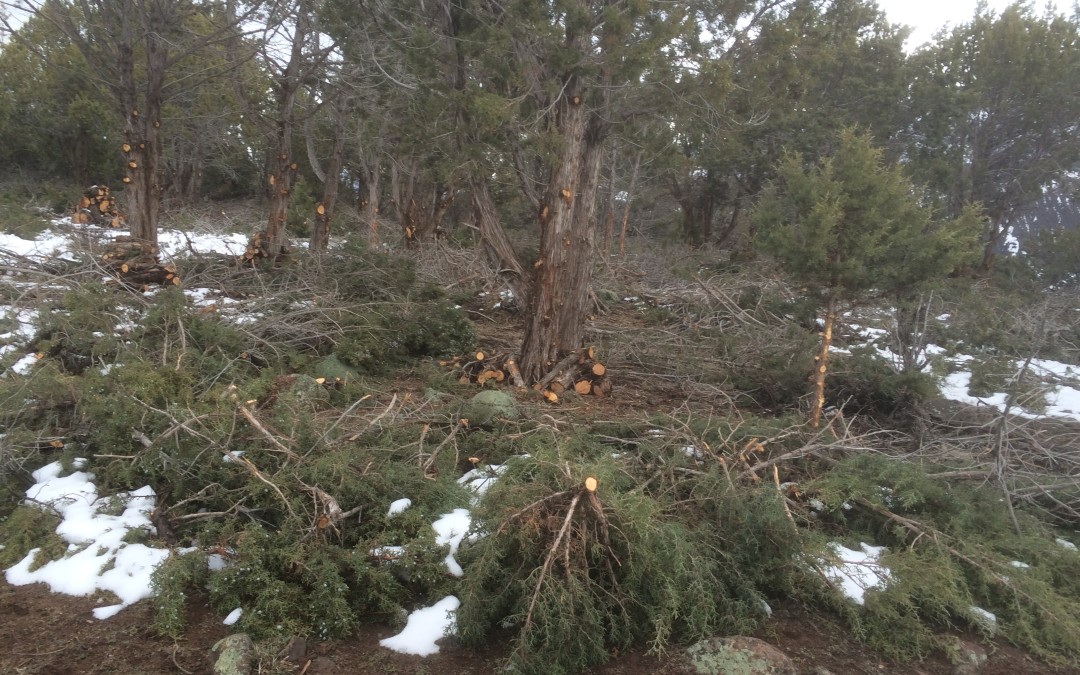 Larry is back trimming the back cedars pasture. It’s mostly junipers but we’ve always called it the cedars. The goal is to remove all the low hanging branches so a fire won’t get up into the crowns of the trees. It’s a lot of work but can...

So a while ago we had a ram yearling die from what we thought was injuries caused by fighting. His bladder had burst. However yesterday we had another ram yearling starting with the same behaviors. One is just bad luck, 2 means you need to look at management to see if... 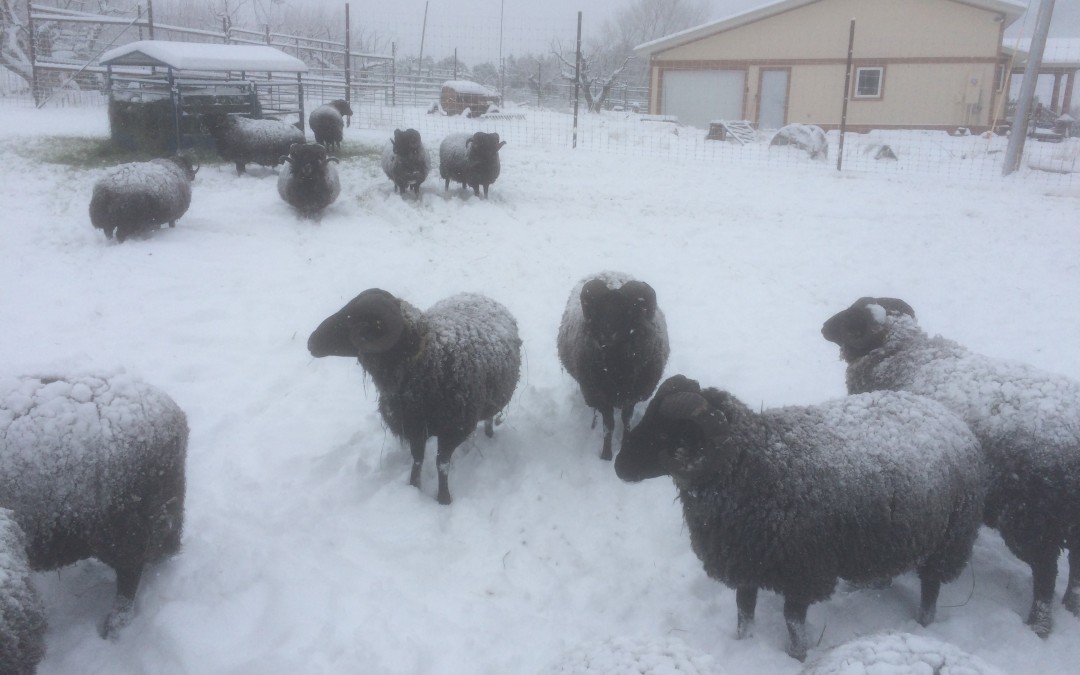 Lovely, lovely snow. About 5 inches now and still coming down. 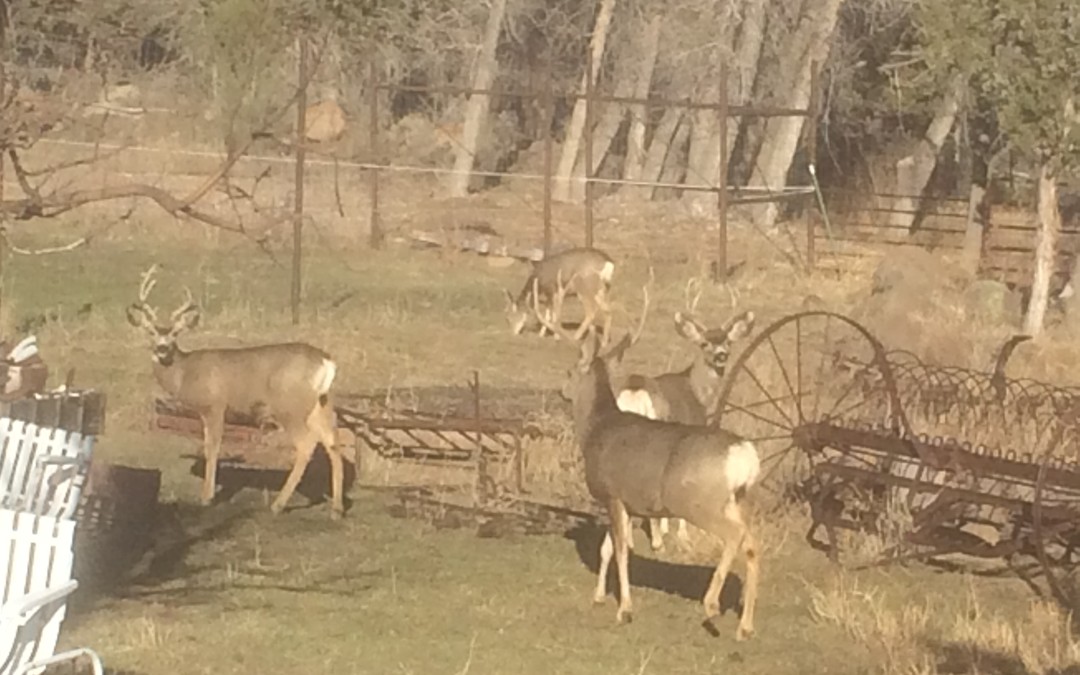 Had to make a trip today and saw 2 different herds of pronghorn antelope along the road. I couldn’t get a picture, unfortunately. Came home and saw these side yard bucks. 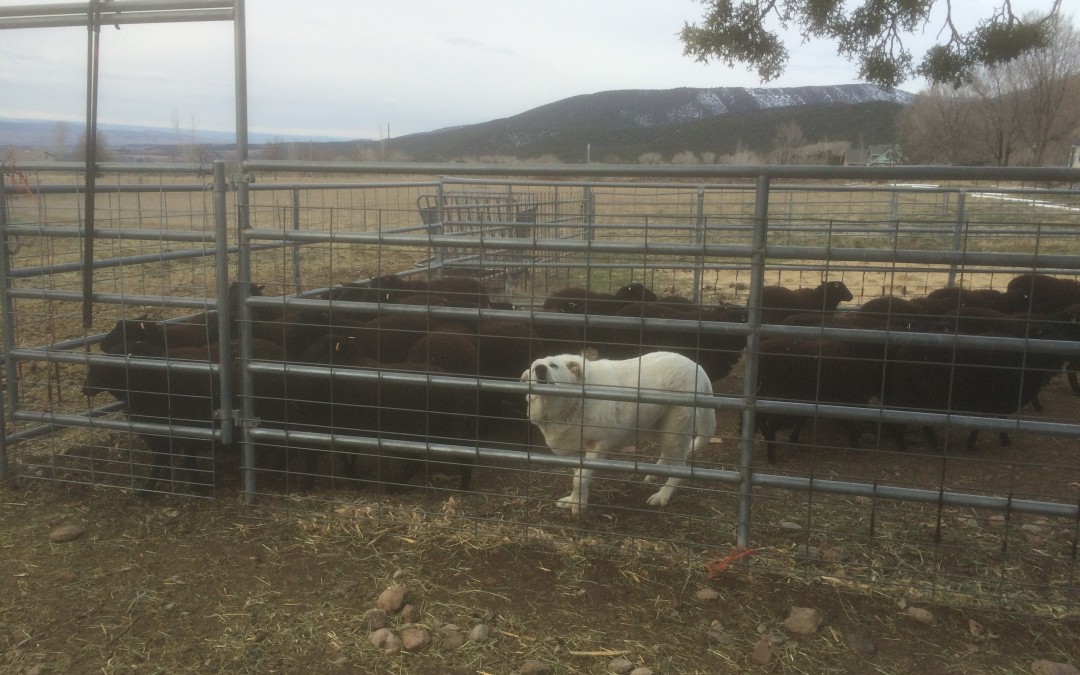 I entered the FEDEX Small Business Grant Contest and am seeking votes to make it into the top 100 and into the next round. You may vote once per day from each of the major social media platforms. Please consider giving us your vote. 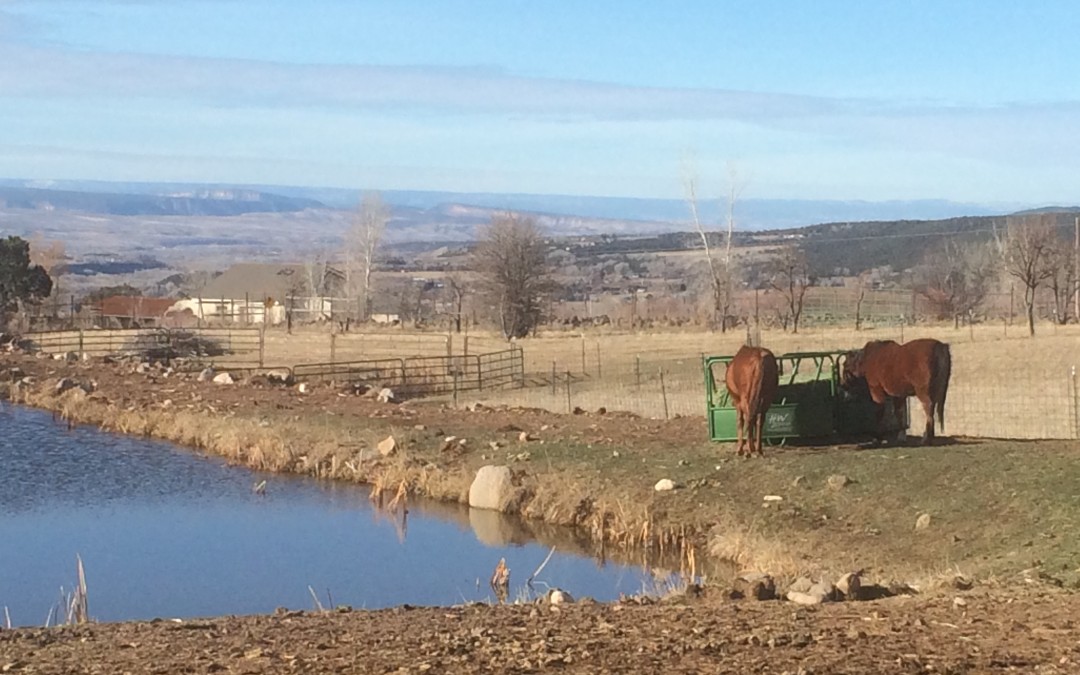 Today was deliver hay day. Five big square bales, over a ton of hay placed. The adult rams, the ram yearlings, pregnant ewes and horses all got fresh bales. Moving to big bales sure makes feeding simpler but it also now means that the tractor is required. The pond is... 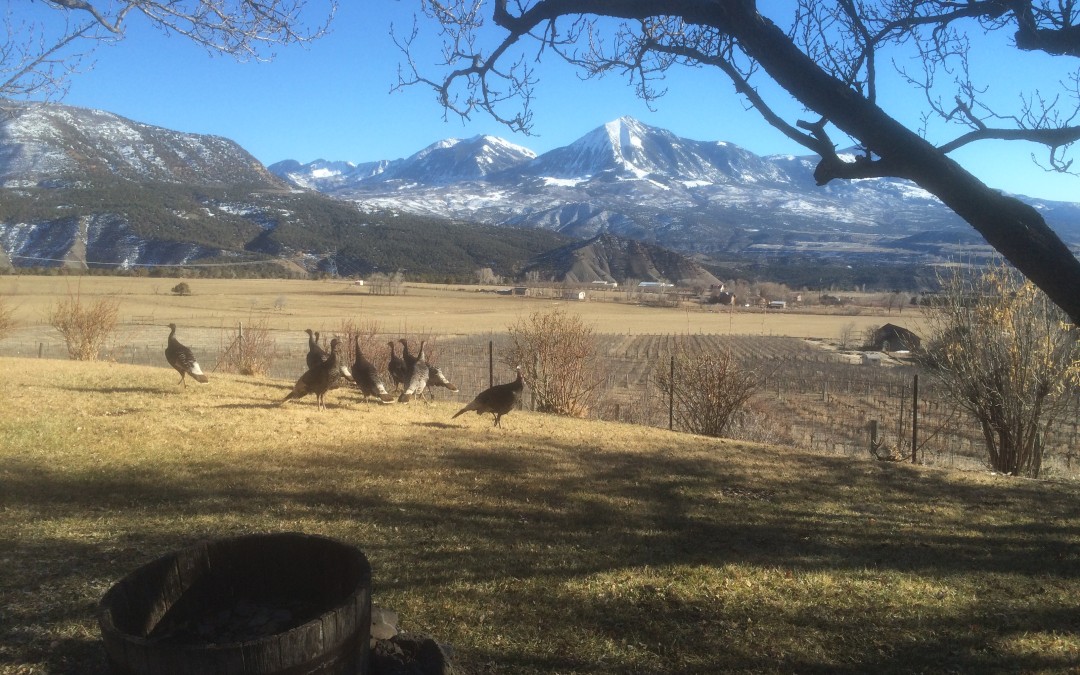 Wild turkeys at Terror Creek Winery. Our farm is on the edge of the mesa below. 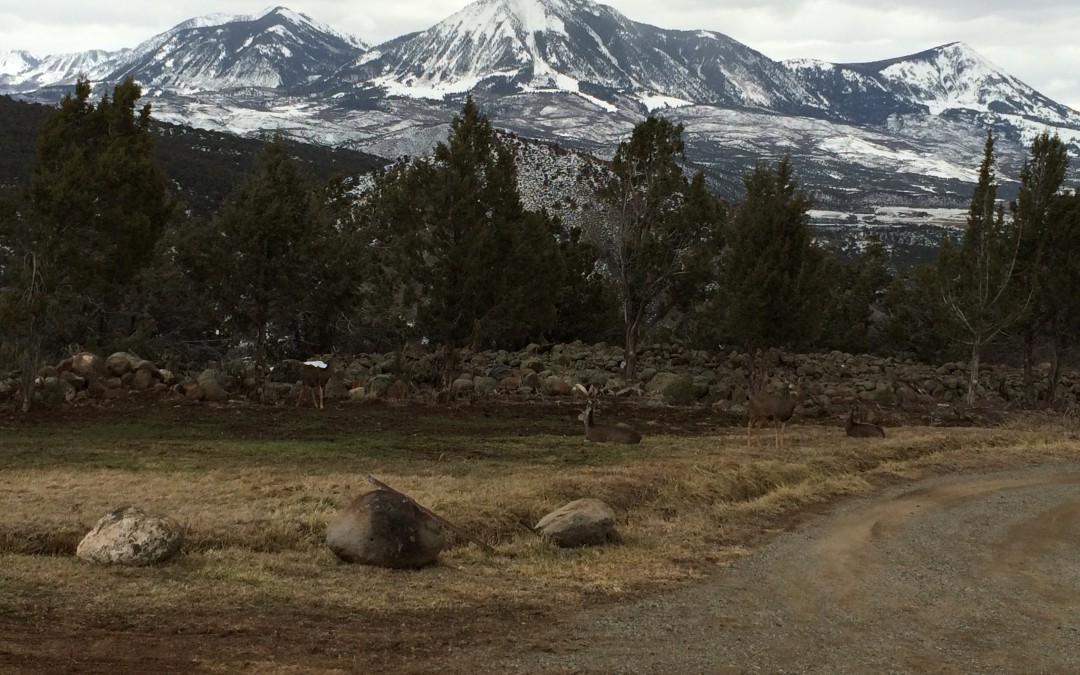 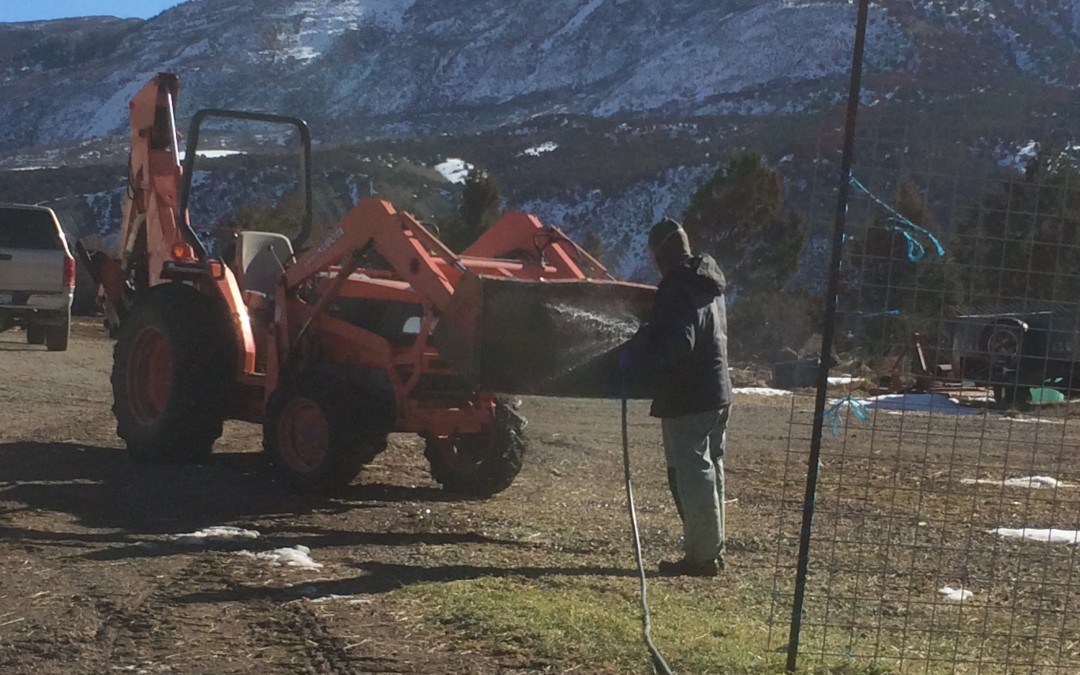 Sadly we had a ram yearling die today. He’d been injured in a fight. As required we had to do a post mortem on him to determine the cause of death. Unfortunately it was a burst bladder, probably from getting a horn in the belly. We are allowed to bury animals on... 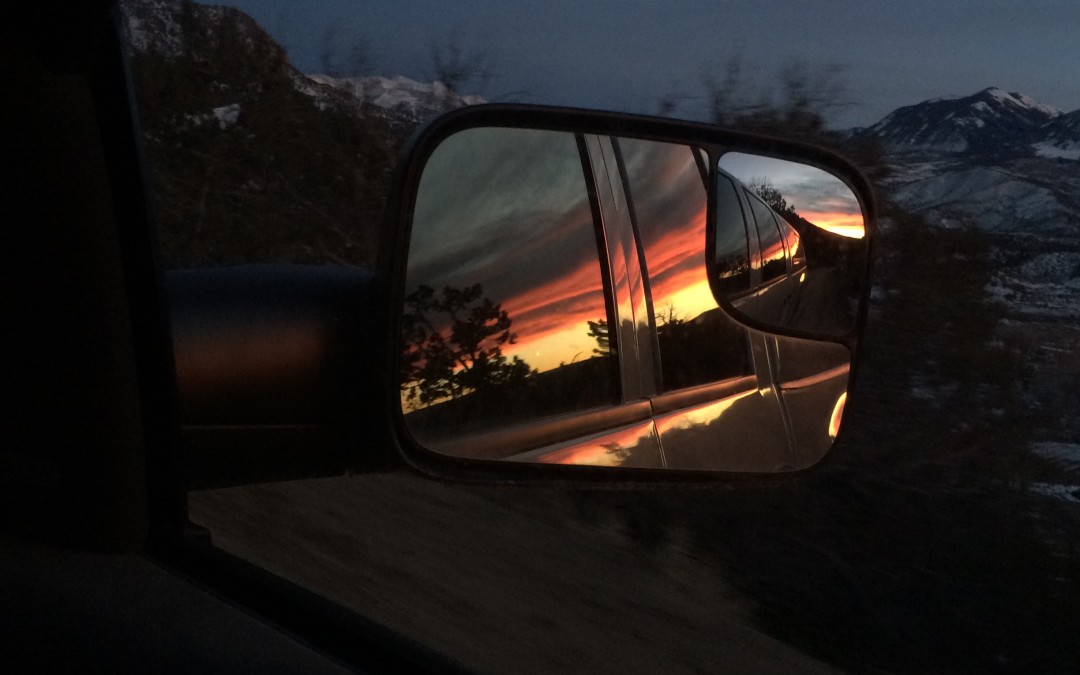 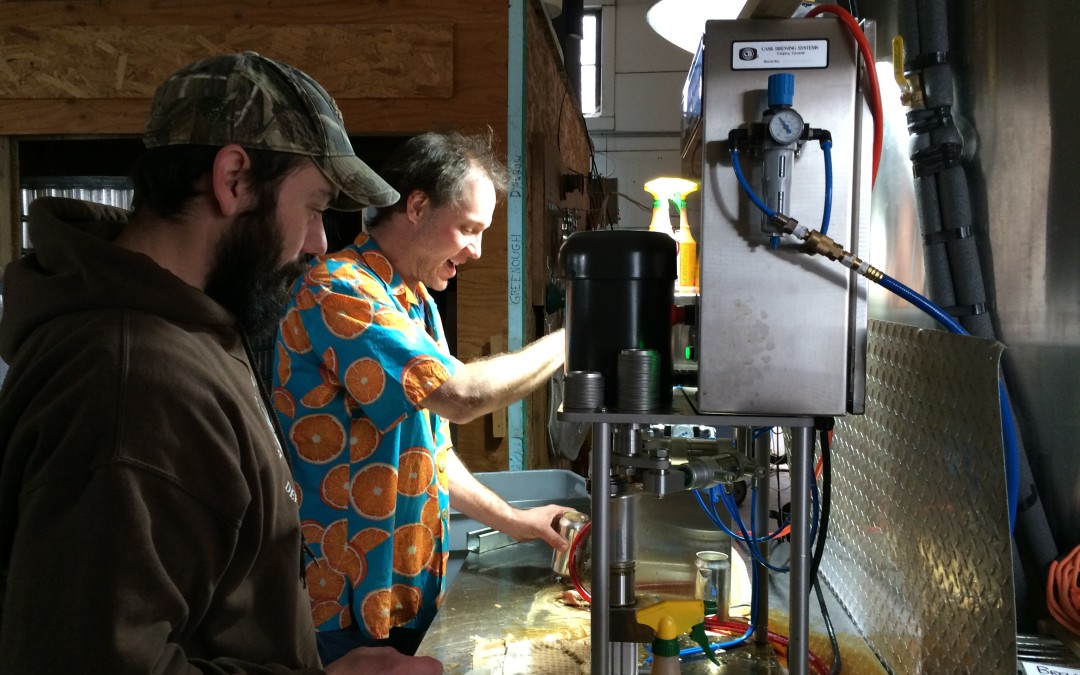 Stopped by Revolution brewing to see the new small canning line in place. 2 at a time but working well. 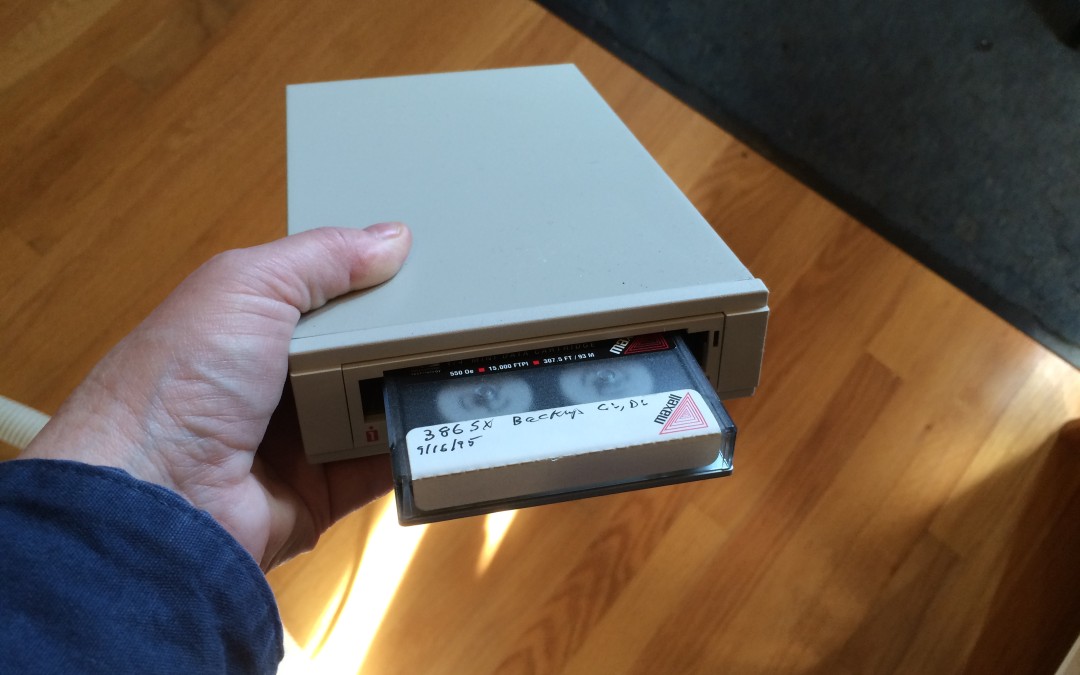 Cleaning up the garage a bit and discovered this old tape drive. It was a wonder of its day, small, compact and high capacity. How times have changed. 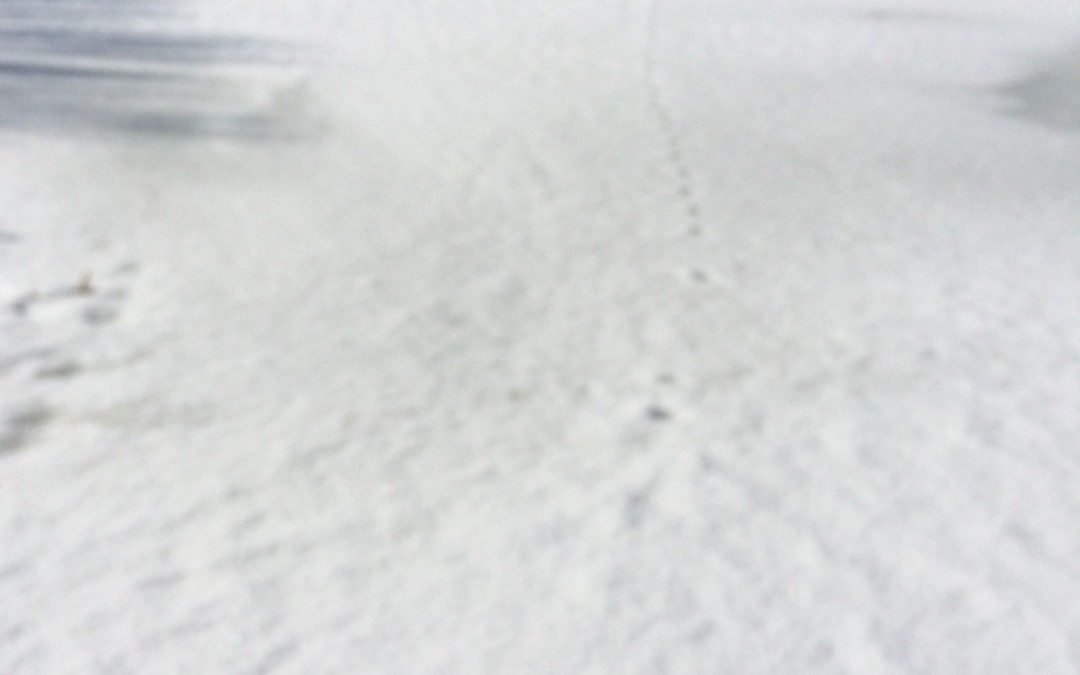 Tracks in the Snow

We noticed these tracks in the snow when we were feeding the horses today. From the looks of it it’s a small canine predator, probably a fox. It doesn’t seem to come anywhere near the sheep pens. I am sure our guard dogs kept it away. 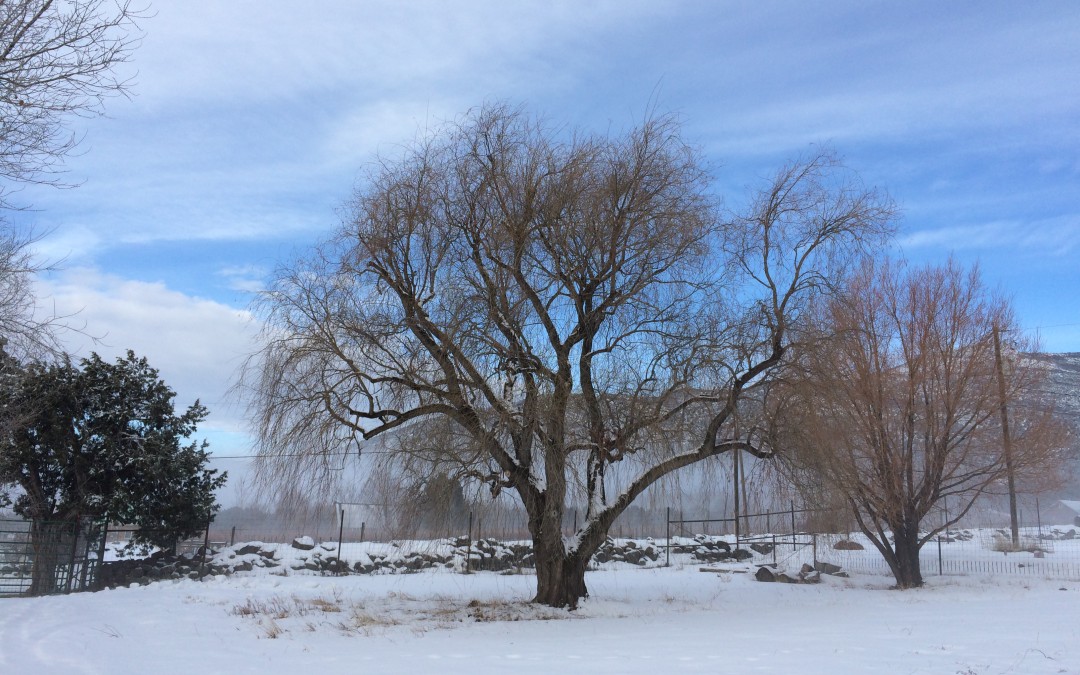 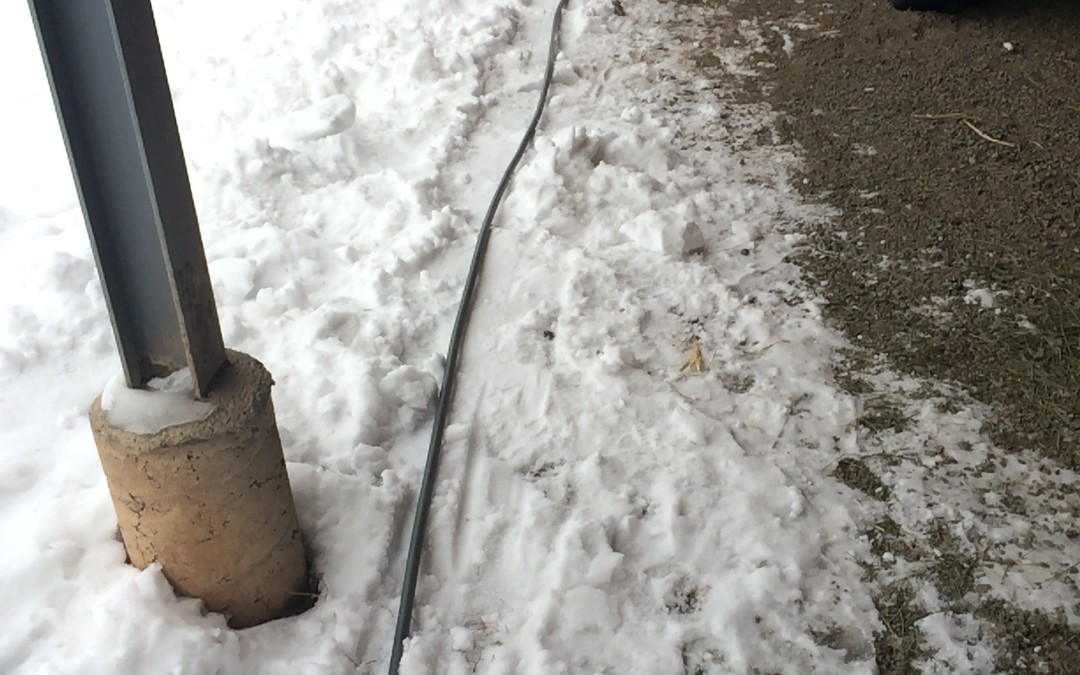 We have a hose connected to a buried pipe that runs ditch water. It usually freezes part way through winter. We leave the hose running and that helps but lately we’ve discovered that we can keep the water running longer if we cover the hose with snow after we... 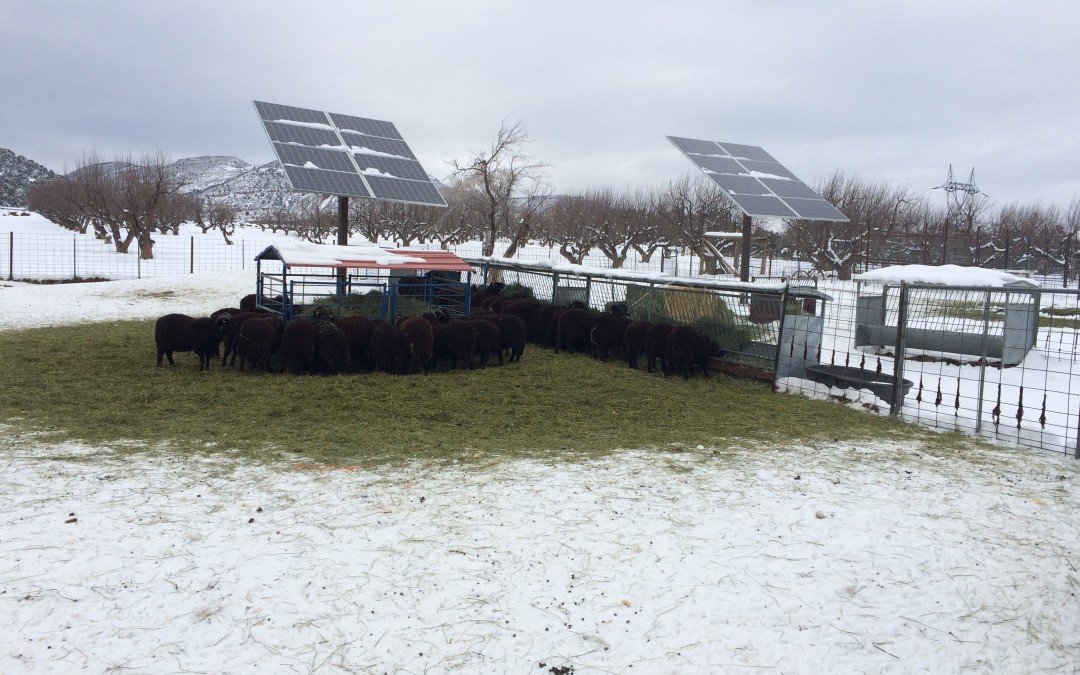 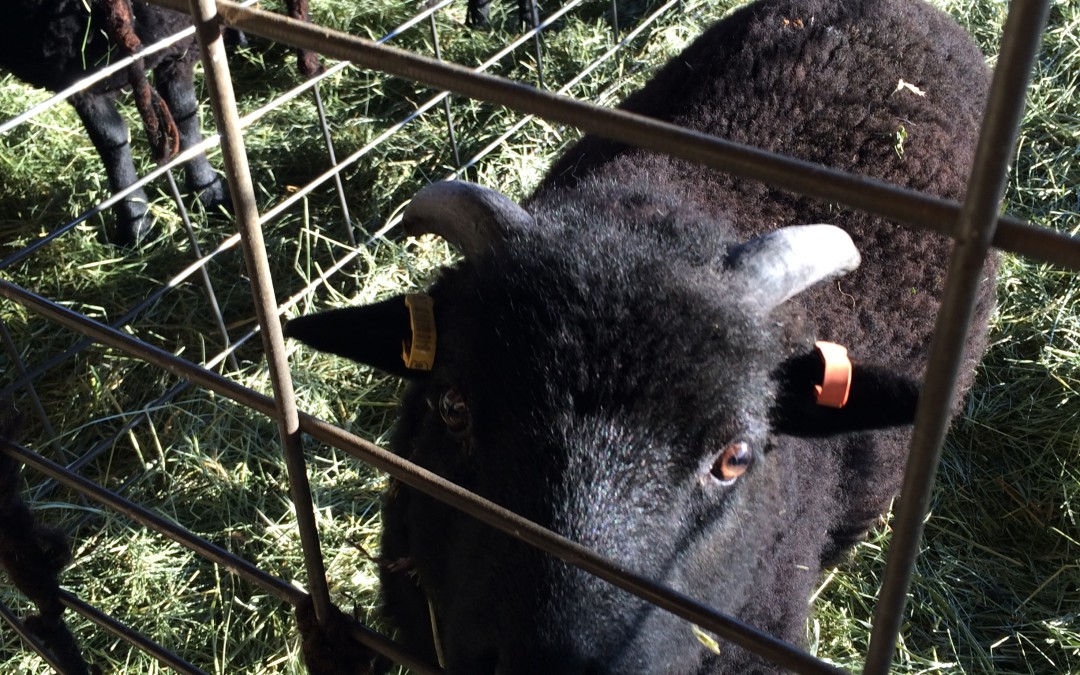 Sterling is in Jail

Little Sterling is the lamb whose mother died when he was only 3 weeks old. He’s small and stunted and can’t live with the rest of the ram lambs. However he seems willing to try to breed the ewes so he’s now in jail in a separate pen in the hay barn....

Most of this past year has been spent working on our Lambtracker open source flock management program. As a result this blog has been totally neglected. My twitter feed has been the one thing that I am keeping up with. It’s a lot easier to just send a quick...

We are again a participating flock for the USDA NAGP research project in non-surgical AI in sheep. This picture was taken the day before the inseminations. We synchronized the ewes and then teased them through the fence with the live rams. All 24 experimental ewes...

Where did August go?

August just flew by. We moved sheep to fresh grass a lot, I was trying to keep them in fresh food every 24-48 hours. So a lot of the time was spent moving fences and figuring out where they were going to next. The late July flood started our annual monsoon rains and... 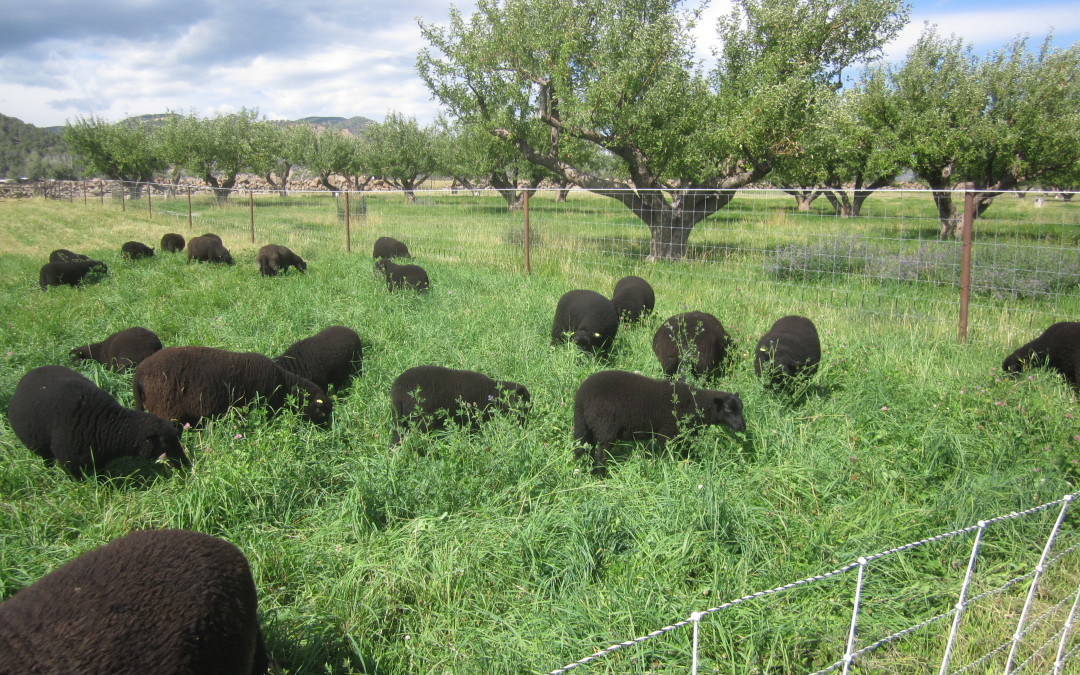 We move the sheep to fresh grass every day or two. We use electric netting to keep them contained in the grazing segment. This allows the grass to rest after grazing and is really improving the quality of the pasture.

Just got a lot of new yarns back from the wool mill. We’ll be adding them over the next few weeks to the store.

The Flash Flood of 28 July

Yesterday we had a rather “interesting” event. Major rain causing flash floods. Here are some of the pictures:

We just got back from our yearly CO Woolgrowers Convention. This is the once a year 2 day meeting of the sheep industry in Colorado. In addition to the regular reports on the world meat and wool markets, what the US Government is doing about grazing and water rights...

Grazing continues and we are on our second round of grazing the main pastures. So far irrigation water is good, but there is no snow on Mt. Lamborn. The old saying is if there is still snow on Lamborn by the 4th of July it’s an ok year for water. So it’s...

It’s been very busy but we are now done lambing. We ended up the year with 89 live lambs born and 5 stillborns. 1 lamb died at 1 week of age for unknown reasons. Another was crushed by a wind blown heavy fence so we have 87 lambs left alive. We had a lot of...

The remaining pregnant ewes are now out on pasture ready for lambing. The grass is still very short so we are feeding them hay. I’ve also gotten their mineral feeder out and filled. We don’t feed any grain so we use a custom mixed sheep mineral to provide...

Lovely April snow. Yeah I know most folks are tired of winter but this nice wet snow will certainly help our water situation this summer. The new lambs are in the warmest and driest spot on the farm and enjoying it too.

Ken and I took a ride with a friend with a plane over Terror Creek. Here is our reservoir This is the view of the watershed above the reservoir. Garvin Mesa looking south Our place from the air Another view

The small dry stone retaining wall around the Shop is a new addition as well and looks great!

We’ve been enjoying the visit from our friends David and Ryan from Wales. Here they are on their last day at Revolution Brewing, enjoying the Grand Avenue Gal.

First of the USDA experiment lambs have arrived. A nice ram lamb. 3 ewes to go. All should lamb within the next 2-3 days.

We started April with nice weather and after repairing the tractor hydrraulics Ken was able to work on clearing brush from the rock wall and repairing damage done by trees and the county road maintenance folk. Meanwhile David and Ryan, AKA Dai &...

We started shearing the flock the end of March. Nice sunny weather but cold and windy. We also are getting the rock put on the Little House Foundation. At least on those days it’s warm enough for the mortar to be mixed.

Looks like the drought continues. We have bare ground outside now and we are below average for snow water equivalent. Our tests last summer doing extremely intensive sheep grazing helped us keep the sheep out on pasture longer than we expected. Given the state of the...